"The fear of יהוה is the beginning of wisdom, And the knowledge of the Set-apart One is understanding"

A swath of China was blanketed with acrid smog Monday after levels of dangerous particulates reached about 50 times World Health Organization recommended maximums, in what environmental campaigners said were the highest such figures ever recorded in the country.

Pictures showed smog so thick that buildings in Changchun, the capital of Jilin province in the northeast, were rendered invisible. One image showed a restaurant's neon sign seemingly floating in midair above traffic, proclaiming, “Eastern Dumpling King.”

Levels of PM2.5 — airborne particles like soot and smoke less than 2.5 micrometers in diameter, considered most harmful to health because they can lodge deeply in lungs — reached 860 micrograms per cubic meter in the city, which is home to about 8 million people.

The WHO’s recommended maximum is a 24-hour average of 25 micrograms per cubic meter.

“Today’s haze is pretty severe and choking. When I walked out the door, I thought someone’s house was on fire,” said one poster in Changchun on China's Twitter-like Sina Weibo.

China's chronic pollution is generally worse in winter, when power consumption — much of it fueled by coal — rises along with demand for heating to combat the bitter cold. 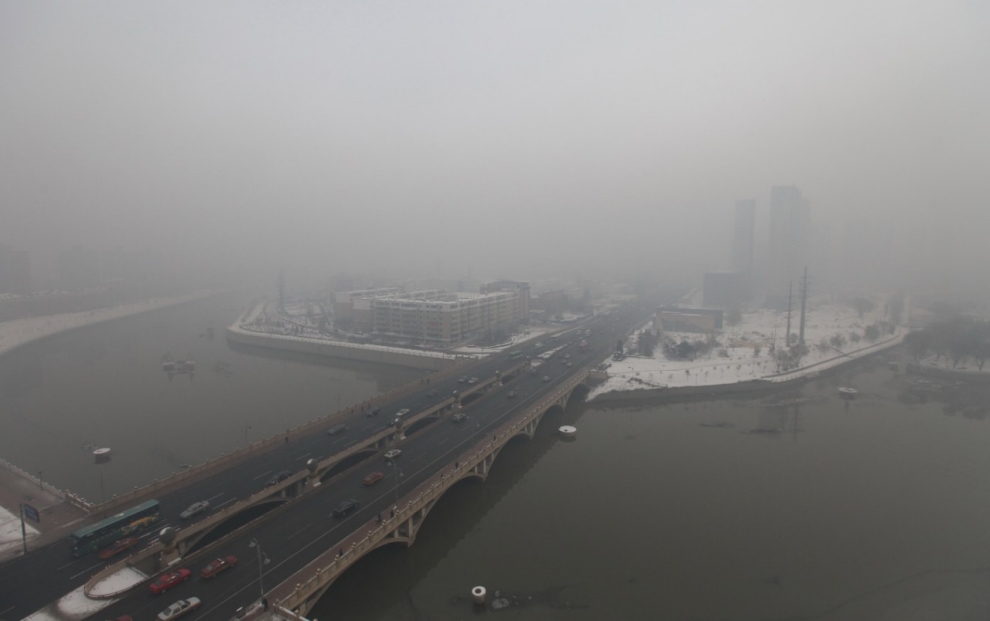 The scourge has been linked to hundreds of thousands of premature deaths and has become a major source of popular discontent with the government.

PM2.5 particulates can play a role in heart disease, strokes and lung ailments such as emphysema and lung cancer.

The level reached 1,157 micrograms per cubic meter on Sunday in Shenyang, the capital of the neighboring province of Liaoning, data from the city's environmental protection bureau showed, and went as high as 1,400 in parts of Shenyang, according to state broadcaster CCTV, with visibility less of than 100 meters.

"As far as we are aware from the data we have been observing over the past few years, this is the highest ever PM2.5 level recording" in the country, Greenpeace campaigner Dong Liansai told Agence France-Presse.

An image circulating online showed a man biking through snow in Shenyang wearing a vintage-looking gas mask, and the official news agency Xinhua quoted a hospital official in the city saying that his respiratory ward was overwhelmed, with all its beds full.

"If heating companies dare to buy cheap, low-quality coal and pollute the environment, they should be discovered and immediately shot," said one poster.

Source link: http://america.aljazeera.com/articles/2015/11/9/china-smog-50-times-who-recommendations.html
Repent, for the reign of the heavens is at hand.
Top
Post Reply
1 post • Page 1 of 1

Users browsing this forum: No registered users and 1 guest